We are delighted to operate fully with face-to-face lessons and activities while following strict SOPs.  At the start of term we were particularly excited that our boarders enjoyed easy access from Singapore via the Tuas land crossing  – the first time in over two years.

Malaysia entered the endemic phase on 1 April 2022 and international borders are now fully open. Fully vaccinated individuals no longer need to quarantine although all international travellers will continue to require the government app, My Sejahtera.  For those coming by air, a PCR will be required two days before travelling and an RTK antigen within 24 hours of arrival.  For those not fully vaccinated, there will still be a 5 day quarantine, if one has a negative PCR on  entry.  The infographics below summarise the procedure for those entering Malaysia by air from 1 April 2022 and for those not fully vaccinated.

Mask wearing in public areas remains compulsory and the government app, My Sejahtera, will remain in use except for outdoor open areas.

The procedure for those entering Malaysia by air is detailed below: 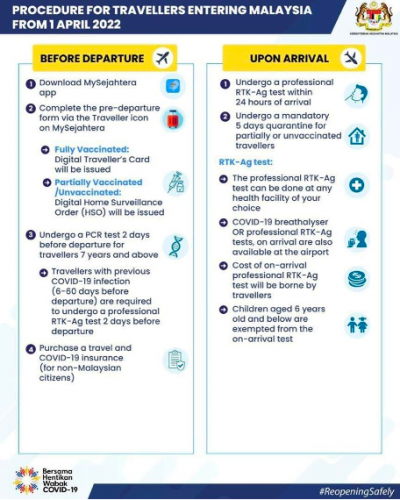 For those who are partially vaccinated /unvaccinated, the following will apply: 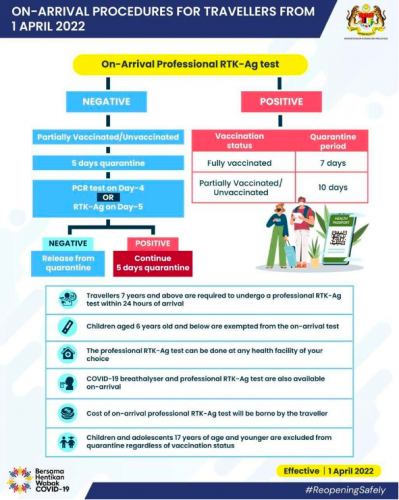 The borders ( both land and air) between Singapore and Malaysia also reopened on Friday 1st April.  This was excellent news and most welcome.

From 1 April, fully vaccinated travellers are able to cross the Malaysia and Singapore land border and no quarantine and no tests are required. For those returning to  Singapore, full details are available here. Further details around the land border will be announced here once it is clear how it will operate but in summary for those travelling to Malaysia: 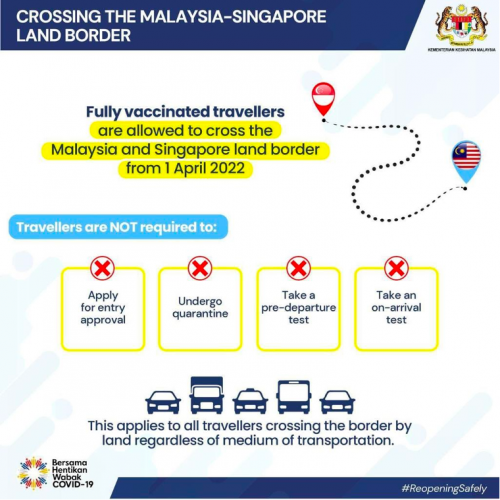 If fully vaccinated, prospective parents are able to visit the College. However, if more convenient, prospective parents and pupils are most welcome to book a Google Meet with the Admissions department to learn more about the outstanding education that we deliver. Please contact [email protected].

Stay at Home if Sick

Pupils’ views of life at Marlborough College Malaysia during the pandemic

Here is a short video with some of our pupils giving their views about how life has been at the College during the pandemic.

“The College is commended for its operational response to the Covid- 19 pandemic and the effectiveness of the procedures and protocols it has developed, refined and implemented.” – COBIS Report 2021

How the College will operate with Covid-19

A guide for Pupils, Parents and Staff 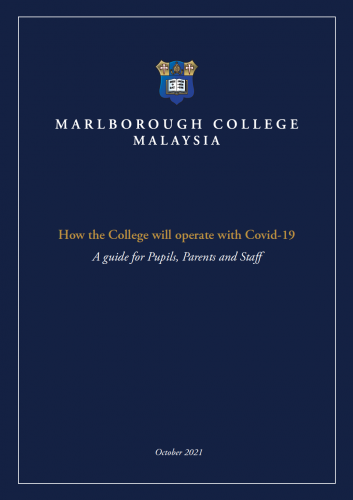 This booklet below explains the Standard Operating Procedures that have been implemented at Marlborough College Malaysia. 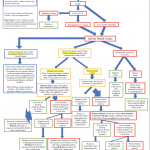 “The College is commended for the breadth of the co-curricular activities on offer, and the efforts made to continue these during lockdown periods.” – COBIS Report 2021

Marlborough College Malaysia has bespoke quarantine arrangements for MCM pupils (and their parents) arriving from overseas that the College has agreed with the Ministry of Health and other agencies.

MCM staff coordinate your child’s arrival, testing, transport and quarantine Hotel. Parents, with valid visas, may also take advantage of this agreement and accompany their children through the quarantine process.

For those pupils travelling from Singapore, pupils are able to travel on a bespoke, one-off bus service via Tuas. For those arriving from other international countries, pupils (and parents) must arrive into Kuala Lumpur International Airport (KLIA).

During their quarantine period, MCM staff will be on call 24 hours a day, pupils will be checked regularly via phone by the duty staff and their Form or Heads of House as appropriate. They will be able to join online learning during this time prior to being able to be physically back in class at the College once their quarantine is completed.

For more details on MCM Quarantine, and how to book, please contact [email protected]

My Experience of Returning to Malaysia During the RMCO

Normally, when I’m getting off an international flight, I don’t think much about that last little bit – the process of getting through the airport, getting my passport stamped, picking up my luggage and heading out to the car. It’s usually very quick and over in less than half an hour.

However, I knew that this time returning to Malaysia would be very different – for a start, I had to have quite a lot of official paperwork in place before even undertaking the journey and I’m so grateful for the support and guidance provided by our wonderful HR Department at MCM for this. This paperwork was checked by the Qatar Airways staff at check-in and found to be in order so I started the long journey back from the UK feeling confident that everything would be okay at the Malaysia end.

When the plane eventually touched down at KL, we disembarked wearing our masks (and the face shields which the airline provided), but instead of just following the signs independently, we all had to stay together. Two officials lined us up in two lines and guided us from the arrivals gate to the point where we could pick up a bus to take us to the terminal.

At this point, we all had to either install the MySejaterah App or update our profile. I had the App already so completed the Check-in page easily enough using the QR code but the last step was the important one and it took everyone a little while to work out how to get the ‘Home Protection Order’ visible on our phones. As it turned out, it was simple – you just close down the app after having checked in, re-open it and go to the ‘Profile’ page (the button is at the bottom of the screen) and it just pops up! That satisfied the official and we were allowed to pass through to get the bus to the terminal.

At the terminal, we had a number of stages to get through. There was a desk with lots of officials, in PPE, available to issue the actual ‘Order for Surveillance and Observation’ to each passenger – this is the document which sets out the terms of mandatory quarantine and I had to sign it to say I agreed with it. On checking my passport details, my name was on a special list of people who had permission to quarantine in the Jen Hotel, and so the official noted this on my documentation and explained how I would need to get a second Covid test before I would be free to go at the end of my 14 days. MCM makes the arrangements for this test, so I didn’t need to worry about it. He also put the little pink plastic bracelet on my wrist and explained that I must not remove it – that would be done by someone else at the end of my quarantine. At first, I was very conscious of it, but after a very short time, I stopped noticing it completely.

I was then guided to another station where I was told to leave my passport and document in a basket, take a seat and wait to be called for the Covid test. This was the bit I was most anxious about. I had heard some scary stories about how unpleasant it was and I’m not a very brave person, but I kept thinking that it’s done many, many times every day and if everyone else can get through it, I could! Sure enough, my name was called and a very gentle person took a swab, first of all from the back of my throat (that was easy!) and then the second one from my nose. I was asked to tip my head back which made it easier for them and it definitely felt weird, but apart from a tiny prickle which made my eyes water a bit, it wasn’t nearly as awful as I had expected and it was over in seconds. A lot easier than getting a vaccination, that’s for sure!.

The next step was to go to a different counter to pay for the test and hotel.

The next stage was to wait inside the immigration office. I had to put my passport into a basket on the counter and wait to be called. Soon enough it was my turn and after asking a few questions about my connection with Marlborough College, my passport was stamped and I was able to pass through the immigration gates. Directly on the other side, more officials checked that my name was on the list for separate arrangements (it was!) and they gave me a goody bag with water, juice, biscuits and a muffin in it. This was a very welcome gift as it had been a while since I had my breakfast on the plane.

Finally, I was taken to the baggage carousel where my suitcase was already waiting and then escorted to the arrivals area where the MCM representative was there to greet me, and ensure that I was linked up with the driver and representative from the Civil Defence Authority. They were really warm and friendly, and after disinfecting my luggage, I was transferred to the Hotel.

It all felt like something from a movie, being surrounded by people in PPE dress, but I know that the staff are keeping themselves safe and they were all helpful and not intimidating at all. It made such a difference that MCM staff had prepared the ground so that I was already known to them as someone who had special arrangements in place through Marlborough College and the agent who met me on arrival was so helpful and just made the final step easy. Throughout my whole three hours going through the process, the MCM Transport Manager was in touch by WhatsApp, checking my progress and the HR Manager was also at the end of the phone if needed and so I felt that at every stage, I had help available if I needed it.

I’m not sure that I’ll ever take easy entry into a country for granted ever again, but in these unusual times, when Malaysia is, understandably, keeping tight control over the risk of new infection, I felt that they were being very responsible, taking the risk seriously and I was happy to accept the hassle that it involved for me, in order to get home.

Just my quarantine period to go, but I’ve already had a call from the MCM duty staff member at the hotel this morning, which was a lovely way to start my day. It feels very good indeed to be part of the MCM family. Everyone cares!

Marlborough College Malaysia has adopted the Boarding Schools’ Association  COVID-Safe Charter ensuring our compliance with government guidance across our boarding and educational provision, establishing a safe return for our pupils.