I first had the opportunity to learn a new language in my first year of senior school (a very long time ago!). French was the only language on offer- that made sense as the French and Scots have a shared history and our countries are near neighbours. For many of my classmates and, later, pupils (in my capacity as a teacher of French, Spanish and German), I often heard:

“But why do we have to learn a foreign language? Everybody speaks English.” Personally, I found being able to speak and be understood in another tongue something of a superpower! Not only did it benefit me when travelling but I gained a greater insight into the culture and customs of my European neighbours.

Scroll forward to 2018 and my arrival at MCM. My new modern language classroom was composed of young people from many countries, with varying degrees of fluency in languages other than English, the lingua franca of the college.

I found it surprising that many took their “superpower” for granted, although pupils who had a good command of another language did recognise that being able to express themselves in whichever language best suited the circumstances allowed them to communicate at a deeper level with friends and family. This is borne out by studies which show that multilingual people do tend to “switch” languages to whichever language best suits the occasion and cultural context.

Indeed, our wellbeing, and that of others, is enhanced by our ability to harness the linguistic skills at our disposal to better connect with the people around us. Cultural differences are reflected perfectly with language. Mastering the nuances of a language means really being able to understand people who grew up with an entirely different set of values and beliefs.

Expressing what you truly feel is often difficult. Some words perfectly encapsulate an idea or a feeling but are almost untranslatable. In his book Translating Happiness- A Cross-cultural Lexicon of Well-Being, psychologist Tim Lomas has collected these phrases. Here are just a few examples:

Gluggaveður (Icelandic)- “window weather”; weather that is pleasant to look at through a window, but unpleasant to be outside in. A very familiar feeling for a Scot.

Hopefully some of our pupils feel Arbejdsglæde (Danish) -pleasure or satisfaction derived from hard work.

Perhaps some of you have felt Gemas (Indonesian)- a feeling of love or affection; the urge to squeeze someone, because they are so cute.

The word нельзя (nel’zya!) in Russian, as a term of admonition, means “do not, under any circumstances, do what you are about to do. It is forbidden!” That concept is neatly condensed into a single word which goes beyond a simple “No!”

Another poignant phrase is  Kǔ qù gān lái  (苦去甘來)(Mandarin)- to go from pain, come towards sweetness”; happiness or relief after going through trying times. This may be one for our pupils who are entering exam season at the moment.

意味) 初めに思った心。最初の決心。– one of my Japanese pupils shared this phrase with me. It is used to remember the feeling you had when you first tried something new, after having got used to the experience. As we get older, we can probably identify with this concept.

However, not everyone has the good fortune to be brought up in a multilingual household so, for the many who are learning a new language, it is, admittedly, intellectually challenging but over time self-confidence grows and the experience is hugely rewarding. Not only does learning a new language contribute to our well-being, but it is shown to improve memory, enhance creativity, provide you a better insight to your first language, and even delay the onset of dementia in old age. 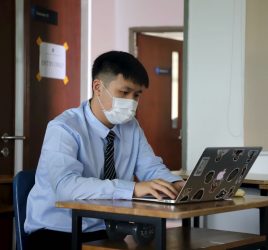 A Guide to Effective Exam Revision