The Wind in the Mangroves | Parent Wellbeing Blog

[with apologies to Kenneth Grahame]

Ratty, Mole and Badger sauntered down the well worn track towards the lake, or rather “The Lake” as it had come to be termed, such was its magnificence. It was a hot, hot day. So hot that momentarily Mole mused that once upon a time he had rather liked the lazy days of the changing seasons, a nip of frost in the air, the hint of things on the move, the scent of, here he paused and sniffed the air, yes, the scent of leaves falling.

“You all right, Moley?” enquired Ratty. “Not overdoing it in all this heat are we?”

“I’m perfectly fine thank you,” he replied, eager now that the moment had passed, to press ahead.

Badger gave a gruff hurumph, flicked a passing lizard off a paw, and eyed the water ahead with a shrewd gaze. It had been his idea after all to set off for a grand picnic by the lake. A chance to reconnect with his old chums and to catch up on whatever passed for “news” in this neck of the mangroves. Pausing only to pick the substantial lock on the gate with a sharpened claw neatly inserted into the keyhole, he heaved it open and on they went. First Mole, slow and steady but with eyes alight at the surroundings; then Ratty all skippity hippity with the excitement of an actual expedition and finally Badger, worldy wise and pretending not to be impressed with the view opening out in front of them.

Someone had thoughtfully mown a track right around the perimeter so that it looked [with only half a squinty eye], almost like a scene from some grand country estate, perhaps one in Wiltshire. The grass was emerald green and glowed in the sunlight bouncing cheerfully down through the palms overhead. The little path wound beneath the trees so that in places tunnels were formed and momentarily the view of the water was cut off. Somewhere above a bird sounded the alarm and tiny winged flashes of yellow darted ahead of them. Badger paused and rummaging in a back pack emerged with a battered pair of field glasses. Solemnly he removed his steel-rimmed specs and ponderously lifted the binoculars to his gaze. Absolutely nothing.

Again the bird called and again he rotated his torso to track the noise. Absolutely nothing.

A third time, seemingly overhead, came the cry. Absolutely nothing.

Ahead Mole and Ratty pattered on.

“Look Badger, what luck. A kingfisher right on that branch in front of us. Oh, look, off it goes!”

With a whirr and a puff of electrifying colour Badger was just in time not to see it disappear into the trees overhanging the far side. He grunted what might have passed as a complaint but Ratty and Mole were too absorbed with nature to notice. Swifts darted across the surface, dragonflies hovered and on a tree trunk a bee eater posed for the visitors, all brazen in its livid green waistcoat. 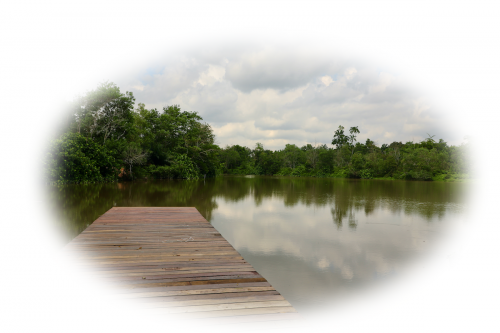 The lake opened out in all its glory as they came to a little landing stage compete with a convenient awning. Blissful shade at last.

“Oh Badger, it’s perfect,” said Mole, his little eyes shining with the scene. “Water, a seat or three, shade, and above all peace and quiet!”

It was true. Try as they might not a rumble from faraway folk could be heard. Instead there was a dull plop as a fish broke the surface, another mewing cry from far above as an eagle drifted past and the busy hum of insects and the occasional skitter in the undergrowth. Ratty adjusted his bathers, a nifty pair of what once might have been Bermuda blue shorts, and slipped into the lake. He lay on his back, a rotund stomach comfortably supported by the water, and whisked a whisker in satisfaction. Mole contended himself with dabbling a small paw while Badger set to with the hamper. Out came several bottles of pop, glistening with condensation, a selection of papaya, mango slices and pineapple and finally, his piece de resistance, a pandan sponge cake wrapped in a blue gingham cloth. Carefully he spread the delights out and then lay back on the bench. He closed his eyes. Bliss. Little paddly noises from Mole, the occasional splish from the floating Ratty and the murmur of nature.

“Moley,” he murmured, “what do you suppose folk do all day? All that busyness with their business? All that rush and fuss, push and bother?”

“Hmm. Funny old world when they could be down here just sitting and thinking and eating. Why ever don’t they wander by the water?”

“Indeed. Or they could just be snoozing. One shouldn’t underestimate The Snooze, Badger.”

“What do you think Ratty, old pal?”

But reply came there none for Ratty, taking to heart the importance of The Snooze, was drifting gently round and round, floating to a whisp of wind.

“Ah well Moley. At least it’ll soon to be time for luncheon. Nothing like a snack, a cool drink and a chat for settling the world eh?”

But reply came there none for Mole’s eyelids were down and a soft puh issued from his lips.

Badger propped his head up on one arm and mused about the importance of less being more. He gazed wistfully up at the cloud capped towers and recalled a glimmer of speech he’d once heard: “We are such stuff/As dreams are made on, and our little life is rounded with a sleep.” Just when he felt he was on the verge of some tremendously insightful moment of grand philosophy he felt his breath even out and a tremendous lethargy overtake him. Perhaps a nap first, then lunch, then philosophy. Hmm, he murmured drowsily, what fools these mortals be.