The Power of Conversation in the Digital Age

Observing one of our recent Friday well-being sessions, I was reminded of the immense impact of conversation on interpersonal connections. Being one of the three C’s of MCM – Conversation has always been recognized as paramount for connection and empathy. However, I want to highlight how, in this new digital age, conversations are even more critical to the development of our young people.

The above quote is from Sherry Turkle, MIT professor of the Social Studies of Science and Technology, and author of the book Reclaiming Conversation: The Power of Talk in a Digital Age. I recently attended a positive psychology summit where Sherri was one of the guest speakers. She reminded us of the impact of online spaces and identities young people are co-creating today. She called it the “I share, therefore I am” era, where we seek validation and connection online in a virtual world where we get to alter and edit our identities to “perfection”. What can we as adults, educators, and parents, do to help guide use of digital tools in a way that adds to the lives of our kids? How can we reclaim the power of conversations in this digital age of superficial connections?

We know that there is no going back in terms of technology and smartphones, nor would we want to, given the immense benefits technology has on our lives. This is especially true in how it’s helped keep us connected during the COVID pandemic. However, we can be more intentional about the way in which we are using these tools, and more importantly, how our children and teens are using them. Researchers have speculated for a long time the impacts that social media have had on mental health of students – and there is ample data to support it. But why is technology – a tool meant to connect us – driving such a big wedge between us and perpetuating loneliness? Turkle believes it has to do with the absence of the biological components of conversation that generate true human connections. She calls it the lost practice of empathic skills: eye contact, listening skills, and our ability to focus on and attend to others. When we lose our ability to see others for who they truly are, and to have others see us for who we really are (sans filters and curated feeds) we lose the feeling of being understood and accepted – we lose connection.

It is no surprise then, that despite the constant 24/7 communication, loneliness at school has been steadily rising around the world. Take a look at this chart presented by psychologists Haidt and Twenge in a recent New York Times article discussing the mental health epidemic sweeping the youngest generation. 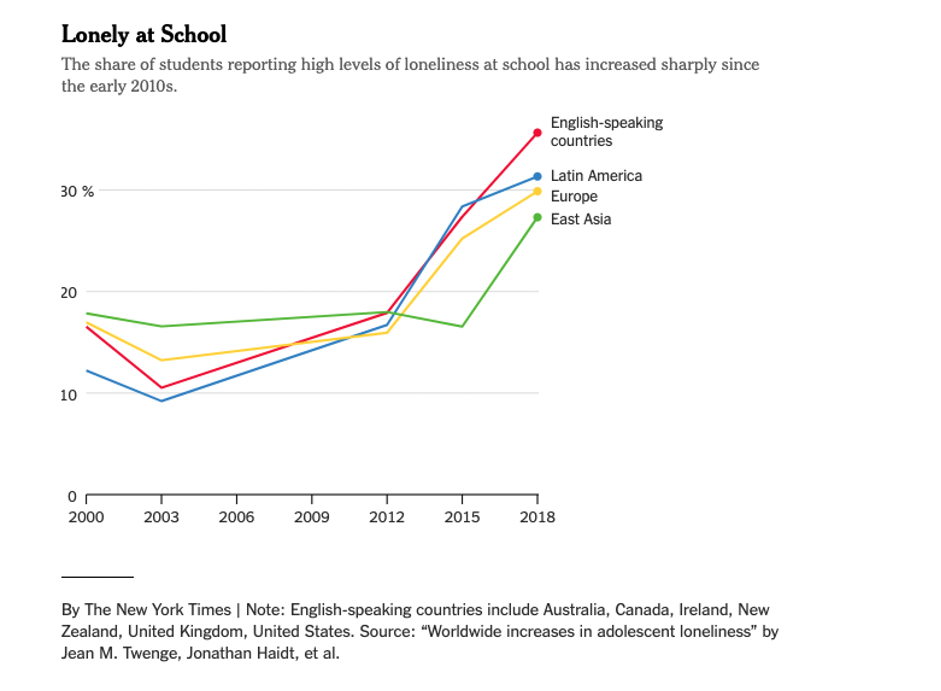 The authors point out that it was around 2010 that smartphones became the norm for people around the world. It was also around that time when social media platforms began including validation indicators such as the “like” button for Facebook and the “retweet” option for Twitter. Were these changes merely coincidental with the rise in mental health issues beginning around that time? We know that loneliness and depression are highly correlated, and so the question remains: how can we help shift this pattern to improve the relationship between young people and technology? More importantly, how can we improve the relationships that young people are building with each other?

Turkle suggests that one way is by increasing not only the amount, but also the depth of conversations. In order to truly accomplish this, there need to be times within each day where phones are out of reach. As Haidt and Twenge explain: “It’s harder to strike up a casual conversation in the cafeteria or after class when everyone is staring down at a phone. It’s harder to have a deep conversation when each party is interrupted randomly by buzzing, vibrating “notifications.” Even if phones remain silent, the thought of checking to see who has reached out lingers in the back of our minds and pulls us out of the present moment. Setting up sacred spaces at home and times in the day intended for uninterrupted conversations can make a difference in how we connect to each other. I personally remember some of the best conversations I ever had with my father happened in the time he was driving me to and from school (before social media existed on phones). I wonder, if my phone had been in my hand at the time, would we have connected as we did?

Another piece of advice given by Turkle in her book is the benefit of allowing conversations to have lulls and boring moments. She writes:

Conversation, like life, has silence and boring bits. This bears repeating: It is often in the moments when we stumble and hesitate and fall silent that we reveal ourselves to each other. Digital communication can lead us to an edited life. We should not forget that an unedited life is also worth living.

This speaks to the importance of unstructured, mind-wandering time. Times when we are not stimulated by anything else and our imagination has a chance to wonder. Allowing time for self-reflection and boredom to sink in allows for daydreaming and creativity to emerge. In the same way, allowing conversations to stagnate without the immediate reaction of reaching for the phone can generate a genuine moment of understanding.

The incident mentioned earlier that inspired the writing of this blog post happened because pupils had a safe space to discuss their lived experiences. There was just the right amount of psychological safety, trust, and inspiration to ignite an honest and raw conversation around an important topic. What stood out to me was the surprise and emotion that sparked when the group realized how akin their fears, worries, and experiences were. There was a genuine moment of empathy and connection there. We need more of these moments to re-ignite our ability to see and show up for each other. Conversations – uninterrupted time to practice empathy skills such as listening and eye contact – may just be the best way to get us there.

Our 3C’s: Companionship, Conversation, and Compassion are as essential as ever in the digital age.