Magritte’s Pipe and the exploding Octopus: a lesson in adaptability

A recent conversation found me on the wrong end of a 5 year-old’s wit after I admired his artwork. “What a colourful fish,” I said. “It’s not a fish. It’s a painting,” the young artist replied, laughing at his own joke and unknowingly reprising the surrealist conceit of René Magritte’s pipe, of which more later.
“Adaptability, flexibility, agility.” They sound as if they have been copied and pasted from the job description of an Olympic gymnast, which I emphatically am not. We have all heard these words like a rallying cry time and again in recent months and I have used them myself and meant them as we grappled with the height of the pandemic. However, as the world begins to emerge from COVID-19’s grip, the virus has left many uncertainties and these remain essential qualities.
Personal and organisational adaptability really are all about the same thing: people. So handling the rough times when they come, is as much about a state of mind as it is about bracing ourselves for the next impact with feet firmly planted and our Business Continuity Plan to hand; an honest self-awareness and an appreciation for the people and the environment around us. 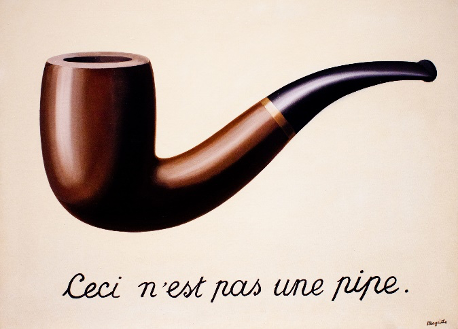 Take the College itself, for example. As the full impact of COVID-19 was being realised and we were in our “Resolve and Resilience” phase, clearly leadership at all levels along with clarity and honesty of communication were essential. To understand the flow of information, it would seem intuitive to look at MCM’s organisation chart, which brings me back to paintings of fish by small boys and to Magritte’s 1929 “Treachery of Images,” shown above, with the famous line “ceci n’est pas une pipe.”

To the amusement, enlightenment or irritation of his audience, Magritte’s point, just like that of my young friend, was that this is oil on canvas; it cannot be smoked, merely observed – it is a two-dimensional image of a pipe, just as an organisation chart is two-dimensional and cannot truly show the spirit, culture, strength or nuances of a dynamic and values-driven community of passionate people.

In 1982 Thomas Peters and Robert Waterman published a remarkable book, In Search of Excellence, in which they explored the difference between the traditional 2-dimensional organisational structure that still hangs doggedly in the foyers of head offices around the world and what became known as the 7S Framework.  Their hierarchically flat, complex and web-like 7S structure suggests that layers of meaning and connection influence an organisation’s – and a school’s – ability to adapt and, importantly, show that such flexibility, adaptability and progress are dependent on all parts of the matrix, not just transactional top-down directives.

So structure alone does not make an organisation and what Peters and Waterman identified were the following seven elements:

Although they would be paralysed without structure, strategy and systems, arguably there have been few occasions in recent history when shared values, loyal staff, their skills and style have been more important to individual and organisational wellbeing, adaptability and resilience. 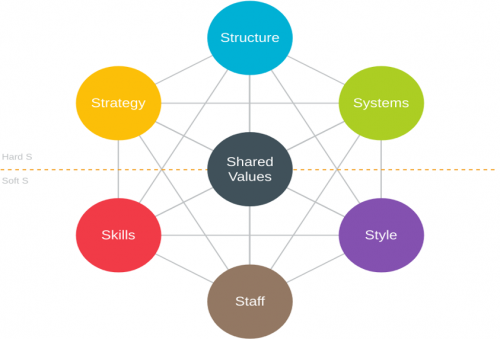 Yet the challenges that make adaptability and flexibility so important can also be the triggers for anxiety and a fight or flight response to perceived threat that pulls us back towards the comfortingly familiar, the sanctuary of tried and tested. This is the resilience paradox: on those occasions when flexibility, learning and change most need to be embraced, the scale of the challenge and the prospect of failure can create inertia or even retreat. This paradox can be just as limiting and damaging in the context of positive challenges, such as parenthood or promotion, as it can be when facing actual threats.

Here we return to my young artist friend and his fish. When he stopped laughing at his existential joke, he sombrely pointed out that the explosion of paint beside his fish was an octopus or, more accurately, a representation of an octopus. As I searched for some diplomatically appreciative reply, with candour and self-awareness beyond his years, he informed me “I can’t paint octopuses – yet.”

Some years ago I had the pleasure of meeting Professor Carol Dweck, the now world-famous psychologist whose Growth Mindset philosophy has been so influential in raising achievement and self-esteem among millions of children. It applies to Pre-Prep paintings of octopuses as well as to adults and even to organisations. 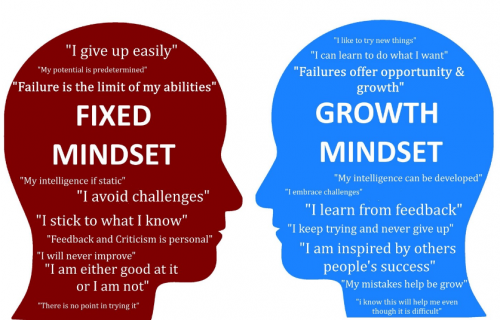 Often as adults, parents or in our professional lives, we feel compelled to have the right answers when actually we would be better to ask the right questions with humility. One of the singularly most powerful meta-skills is learning to learn. This is what great teachers help children to do, but adults are notoriously poor at it and that fear of losing authority, losing control or nor having the skill or the power to solve the problem is part of the resilience paradox.

In his book, Zen Mind, Beginner’s Mind, Shunryu Suzuki wrote that ‘In the beginner’s mind there are many possibilities, but in the expert’s there are few.’ He uses the term shoshin, meaning ‘beginner’s mind’ to show that humility removes impediments to growth and adaptability; if we consider ourselves to be or to need to appear as experts even when we are not, we are likely to have a fixed or closed mindset to as yet unknown solutions and to the adaptability that will help bring success and contentment.

Life is never two-dimensional and few things are more liberating than receiving wisdom from a 5 year old. 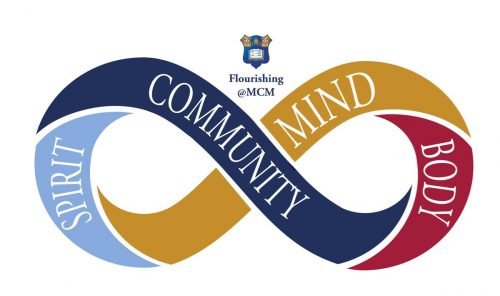