Reflections on Flourishing and Use of Pupil Voice

Pupil leadership and pupil voice have been regarded in previous posts on our blog as a priority for MCM. Pupil Councils are effective channels for pupils to suggest improvements to various areas of the school including food, boarding, management, and well-being. Pupils gain experience representing their year group or house in different forums such as the Eco Council, Food Committee, Whole School Council, or Digital Ambassadors. A perfect recent example of pupil voice and learning how to listen has been in engaging the Pupil Councils to help us determine what pupils across both Prep and Senior school value in terms of their own well-being.

As part of our journey to building a Positive Education model for the MCM community, we engaged the entire pupil body (Years 7 to Upper Sixth) in an exercise to reflect on what the word “flourishing” meant for them. We collected this data over a period of two weeks and analyzed the key themes from their comments. Some examples of pupil commentary are below. 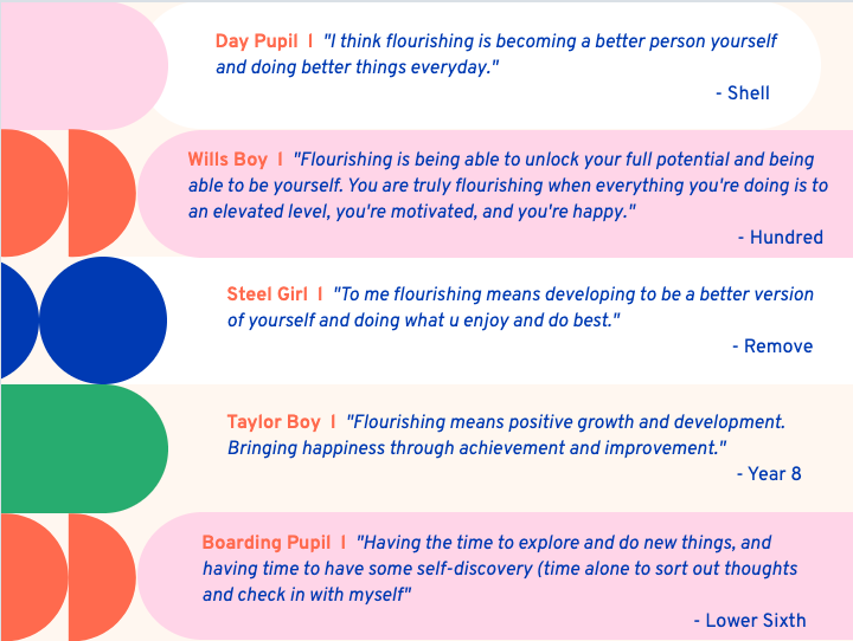 The themes in the chart below emerged as most important to pupils in terms of their own flourishing or well-being. We presented this data back to them in assembly and form times, and asked the Pupil Council representatives to lead conversations around the meaning of these results with their peers. The Prefects for each Council group – boarding and day pupils, asked the representatives to bring back to the Council (for discussion) what they heard within the conversations around school. 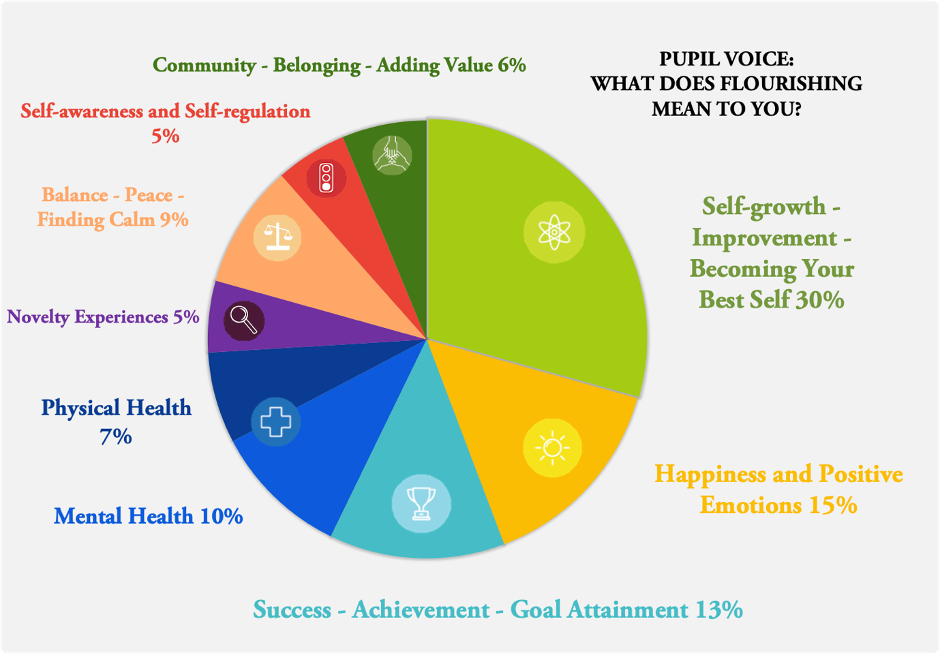 This process of collecting qualitative data, feeding it back to the community, and sparking discussion around the meaning and themes of their information empowers pupils to take charge of the direction of their well-being. It also equips us with powerful information that we can use to develop priorities moving forward. An anonymous survey format provided the opportunity for more voices to be present, increasing the diversity of perspectives. Giving them back their information and asking them to reflect provided context for their understanding of the concept of “flourishing” by presenting the different ways it is being understood by peers. As one pupil put it in her reflection:

“…The stats of the feedback from the google form were quite interesting, they differed slightly from what I thought the results would have shown. The information that we received was helpful because I feel it gave me a better understanding of the term flourish that somehow broadened my scope but also magnified it…”

Using this type of qualitative research is empowering to the community. Placing emphasis on capturing the diversity of students’ experiences, its addition to the context of researched constructs can greatly facilitate the adoption of these core values. When we understand something as personal and important, we are much more likely to pay attention to it.

The next steps in this process involve accessing the younger age groups – those in Prep below Year 7. To do this we will organize qualitative data collection using focus groups – engaging a group of pupils directly in a conversation around what they think it means to “flourish”. With the younger years, it is important to have the presence of a facilitator that can lead the discussion and encourage participation and conversation. Their perspectives will be recorded and categorized again within themes that will either add to or reflect the data already collected.

Finally, we will use this information to inform further decisions around well-being initiatives around the College. Taking into account that pupils value self-improvement, for example, we might consider how to offer as many opportunities for them to increase personal skills and try new things within the well-being curriculum. Using data in this way, we believe pupil leadership and pupil voice are well-positioned to help us develop our community and enrich the experiences of all pupils at the College.