The recent Upper Sixth mock exams put to the test all that the pupils have learned academically over the last two years. No doubt the reports that their beaks have been writing this week will largely focus on their performance in these assessments, the areas that they need to improve in, and the likely grade that they will achieve in the summer. But as the Upper Sixth pupils edge closer to leaving MCM, it is important to reflect on the wider education that they have received during their time with us. As Albert Einstein famously said “Education is that which remains, if one has forgotten everything he learned in school.” 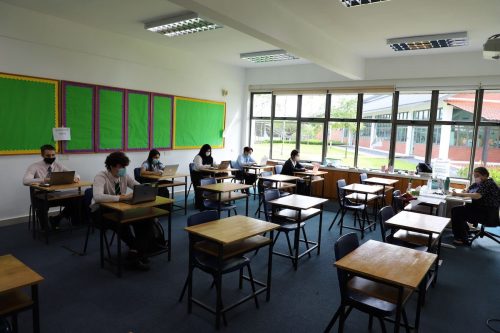 This is particularly pertinent when considering what the Upper Sixth have been through in the last twelve months. The shifting between online and physical learning combined with the uncertainty around how they will be assessed in their IB Diploma has caused considerable anxiety for many. It is important to reflect on how these experiences may have impacted upon the young adults that they are developing into.

Schooling is, of course, about more than just learning to pass exams. School is where you develop all those really important other things like character, personality and networks that make you a successful adult – sometimes that learning comes naturally, and is enjoyable and sometimes those lessons are more challenging.

Over the past year, at times it may have felt to our pupils that education has been stripped back to its’ basics – lessons taught and work submitted. I have seen something different. I have seen a virtual school where all those other important lessons are still being learned – pupils developing autonomy and self-efficacy, solving problems successfully for themselves, at times directing their own learning and their own time independently.

Of course at MCM we have been determined that all those additional and enriching experiences of clubs and societies, sport, music and drama have continued. Our boarders, particularly, have been enjoying a rich and varied programme of activities that have made the very most out of our wonderful campus.

Perhaps most importantly, over the last year we have all learned just how important community and connection is to our own success and wellbeing – that by working together and caring for each other we are also caring for ourselves.

I have never failed to be impressed by the way our pupils have responded to the shifting sands of periods of something close to normality, then CMCO, then MCO on a seemingly endless rotation. However challenging things have felt over the last year, all of our pupils should remember that they have done a fantastic job of engaging with all aspects of College life despite the difficult circumstances. Furthermore, they have learned some incredibly important things about themselves and demonstrated depths of resilience that will serve them well in the future.

I asked my Upper Sixth class what they thought they had learned throughout this stressful period of their lives. Their answers were revealing.

‘Over the lockdown period, I have learned that I can consistently apply myself independently. Previously, I found that hard without adult supervision’

‘I feel that I have built up my resilience and will be able to cope with future challenges. I will certainly be more equipped to expect the unexpected!’

No one would have chosen to go through what we have all lived through in the past year. But we will all have learned important lessons and developed our resilience; something that will serve us all well for the future.