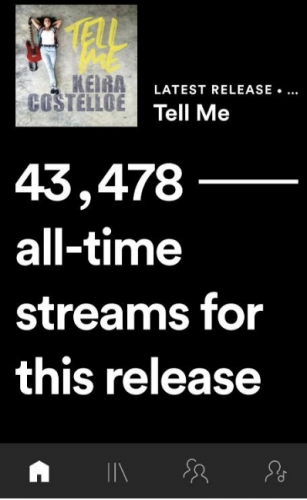 Marlborough College Malaysia pupil, Keira Costelloe has released her debut single “Tell Me” on 14th May 2020.

In the space of just under three weeks, she has almost 45,000 streams on Spotify and multiple positive reviews from her peers in the music industry.

It all began in early 2019 when Keira entered a music talent show in Singapore that was sponsored by Vocal Star from Los Angeles (LA). She impressed the Vocal Star judges and in August 2019 went on to train and perform in the Vocal Star Showcase in LA.

It was during the showcase event she was further discovered by music producers Christopher ‘C-Ray’ Roberts of OnKey Entertainment and Marc ‘M.Doc’ Williams of Indasoul Entertainment. In December 2019, Keira recorded “Tell Me” in LA with C Ray and Marc.

Moving forward, Keira has set up her own mini recording studio at home and is able to link up with her Producers in LA and laydown vocals, harmonies and record new songs remotely.

Keira is presently working on her second single “Never Going Back” and the plan is to release the single this August.