On Friday, 30th August 2019, the boarding community came together for a 5 km run in the plantation opposite Marlborough. Pupils and beaks were tasked with navigating their way back to Marlborough from the starting point, following paper signs that posted the way. Boarders endured steep inclines and battled through thick vegetation, but the sense of achievement and accomplishment once finished was really special. The community was welcomed to either run or walk and talk whilst confident runners cleared a path ahead, not only getting wet but muddy as well! A few Senior and Prep boarders entered a dense area at the 3 km mark, crossing a small trench and narrow paths bedecked with branches overhead. The evening was memorable, fun and enjoyable, though tough; testing our endurance and strength while bringing the whole boarding community together! The run was concluded with a yummy dinner featuring naans, dahl and chicken curry, as well as the classic dessert: brownies!

The Beagle Hash was a new event for some of our Iskandar full boarders, though judging by the perseverance and grit the girls showed, it appeared they had all trained for it! We can proudly say that one of our girls came 7th out of the whole boarding community, with other girls doing very well too, clearly proving to the Taylor boys how fast Iskandar could run! 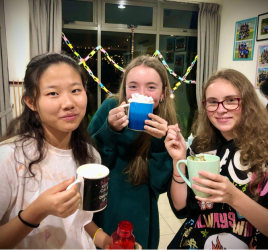