Sixteen pupils from Years 7, 8 and 9 made their way to Kuala Lumpur for a day at the indoor ‘Camp5’ schools’ competition and a second day outdoor climbing at the Batu caves.

On the first day at Camp5, the pupils were tested on both their bouldering and top-roping skills, taking on no less than five of each. The pupils were graded on their number of attempts and zones they reached. As a keen climber myself, it was inspiring to see them push themselves to make possible what they first thought looked impossible. Their good efforts paid off and MCM came 5th with over 6000 points painfully close to 4th place.  Considering that we only entered climbers in the lower age categories, whereas some schools had more climbers in all categories, it showed an impressive effort from MCM! The important matter was, as Mr Shaw told us, that as a school unit we all pulled our weight (quite literally in this case) and scored a great average which speaks volumes for the spirit of the team, and school.  On the bus-ride home, Juliette Bhogal reflected on her experience at Camp5: ‘I think my favorite part of the competition was the top rope. I literally failed the bouldering, I was in such an awkward position. I couldn’t work through the problem because I couldn’t hold myself up for long enough to work out the next move! However, with the top rope, I had time and strength to really think about my moves and it was a lot easier. I felt loads better about it!’ Meanwhile for James Murray; ‘I think the hardest bouldering route was route number seven, you could only use pink and you had to go upside down at one point to go up. I just couldn’t get it, you needed a lot of upper body strength.’ Cameron Andriesz also found route seven challenging: ‘I spent about half an hour on route seven because I was so determined to do it.” Caleb Turner who topped this route also preferred the ‘challenge’ showing impressive body strength on the holds! Ella-Mae Cox found her motivation to top the routes within herself: ‘You can do it when you have a good mindset, otherwise you won’t make it because you think you won’t do it.’ Julio Arola  told me that for him, watching the more experienced older climbers was inspiring, although he was gutted as he told me how Sean, the ‘Spiderman’ from ISKL, missed out on his victory for incorrectly stepping on a black hold in the final and being disqualified. Teaching us, Julio said, ‘how even the best struggle and get it wrong sometimes.’ For Deeksha Dinesha, Camp5 was great for more than just the climbing: “Even though I didn’t get many points and flunked on the bouldering, the best thing about Camp5 was that we made some really good friends and got each other’s numbers. So, it was really fun in all!’

On the second day, our climbers took on the Batu caves for some outdoor climbing. Excellently guided by Mr Alex of Camp5, our climbers took on no less than eight routes, ranging between a short-and-sweet 8m to almost 40m! This was a totally new experience for me too, and so exhilarating to reach the top and look down at what you have accomplished. I will not forget being 20m high up the wall and swapping climbing tips with Ning Tay on the wall next to me as we had previously climbed each other’s wall.  It was fair to say that she climbed it more successfully than myself!  Back on the bus, I asked them which they preferred.  Qistina Tovar, who climbed astonishingly well for a beginner, particularly on one route that both myself and Mr Shaw fell from multiple times, said she ‘really liked the outdoor climbing as it was really challenging for me and it was a new experience!’. On this climb a shout-out must go to Sammie Zhang, who took a new perspective on the route and scaled it with much more ease! For Hannah Lee, the transition to outdoors was a puzzle: ‘I enjoyed the Batu caves – it is really different to indoor climbing, as you don’t really know which rocks to grab onto, and you have to feel around and that was really fun.’ Oli Butterwick who had red hands but a big grin on his face told me: ‘the rocks were quite jagged which hurt my hands a little bit but apart from that, the outdoor was really fun!’. Meanwhile Yao Dong Heng and Julio Arola, our climbing prodigies in the gym said that they were both surprised by just how ‘grippy’ the rocks were outside that made it a lot easier, enjoying bouldering inside the most. I remember Yao’s beaming face when he shouted ‘Miss, I did the difficult one!’. Especially well done also to Alice Yin, Ella Boschsler and Layla Timimi who despite initial nervousness did not give up and all topped their routes with huge smiles – inspiring young girls! What was fantastic to see, was how the pupils both belayed and guided their peers. A special mention must go to Alice and Sammie for their teamwork!

It was an excellent weekend for which we all have the pupils to thank. Their positive attitudes, grit and resilience to conquer the wall has left us beaks eager to build the climbing team, and take them on from strength to strength.  I leave you with a quote from Deeksha that summed up the weekend’s attitude: ‘when you are outdoor climbing you get a lot of cuts and bruises, but it is worth the entire trip. As Miss Celeste said though, “it is almost like a badge of honor as they are proof that you completed it.” 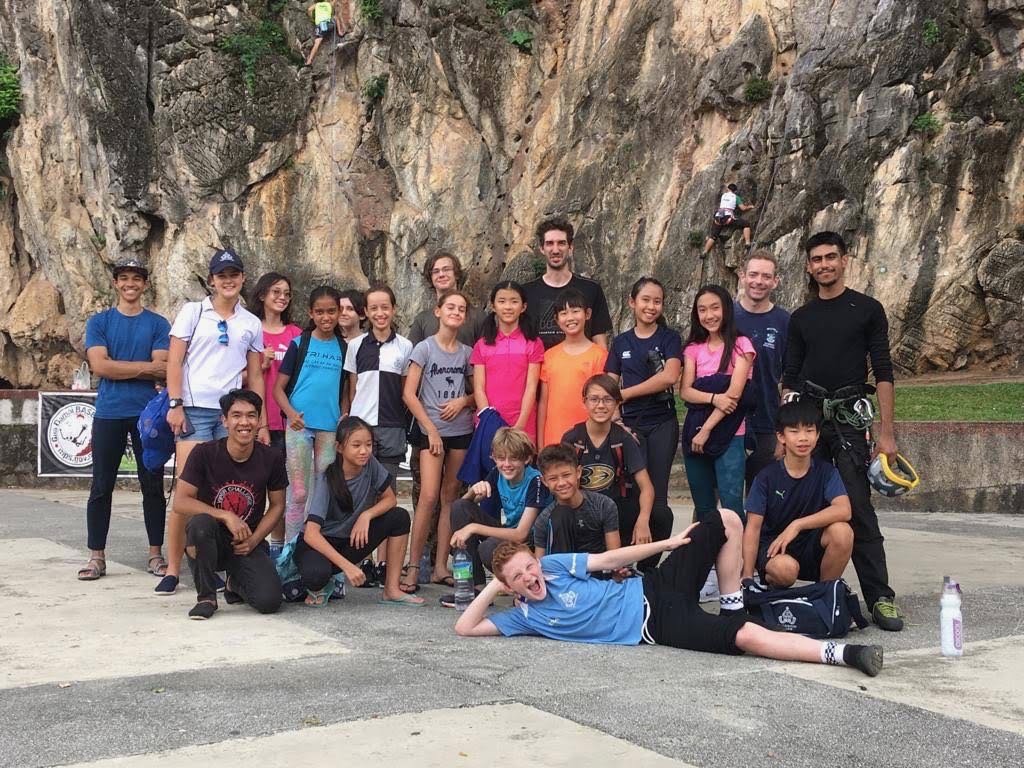