The Johorgraphy Field Trip to Sungai Melayu and Forest City

What better way to start the second half of the spring term with an excursion? On what turned out to be an boiling-hot morning:  Mr Fuller, Mr Ogilivie, Miss Taylor and Miss TV took the IGCSE Geography Hundred on two site visits to study urban and rural development. First to Sungai Melayu, a  fishing village on the Melayu river and secondly the new development of  Forest City. The morning was packed full of activities. Arriving in Melayu the students were warmly welcomed by the local village, vested in life jackets and taken onto the boats in small groups. Clipboards in hand, we explored the fisherman’s village, canals and mangroves. Students were asked to look into detail at certain factors affecting the area; Environment, Sustainability and Livelihoods. Those on Environment spent the time jotting down all sorts of wildlife that we could see- be that mudskippers, starfish, crabs or even puffa fish to account for the kinds of ecosystems that exist on the Melayu. Those writing about livelihoods noted how the ecosystems provide for the village. The fishermen showed us the catches they had made, took us on a visit to the mussel farms, and even hung nets out of the boats to catch fish as we explored the mangroves. Driving out into the Malacca Straits, we could see the looming columns of Danga Bay and the demand for the farms immediately became apparent. Students also noted the appearance of a multitude of restaurants in Danga Bay that required fresh fish and commented on the reciprocal relationship that the villagers have with the residents of Danga Bay- provided a source of income for the village. However, the relationship could be taxing. On asking the locals about their livelihoods, they told us how the increased demand for fish has been challenging to meet due to both rising populations but also because the construction of the reclaimed land destroys the mangroves and habitats needed for such wildlife to meet their demand. This reality reinforced the importance of sustainability within our agricultural practices in order to protect the environment. Malaysia is lucky to have the third richest mangrove population in the world (after Indonesia and Australia) with Johor’s peninsula coast accounting for 17% of that population. A population, which is already under threat from human development, pollution and climate change that must consider its sustainable future.  From 1955 to 1998 for example, Johor lost 46% of its mangrove population. (Christensen & Olsen 1999).  Nevertheless, the presence of the fish, birdlife and mangroves did prove that the ecosystems whilst under pressure are surviving. For students writing about sustainability, the tour was helpful to understanding the role that Danga Bay has in the development of the fishing farms in the Straits and whether continued growth of the high-rise living is sustainable for the future.

The second half of our trip took us to Forest City, which if you have not already been too I highly recommend the visit. Selling itself as the ‘prime model of future cities’,  it is the latest venture by Country Garden. Working alongside the Chinese and Malaysian government, Forest City is set to be Southeast Asia’s Largest mixed-use green development, offering 220,000 jobs and set to finish by the year 2035. It is certainly out of this world- multistorey living, self-driving cars, vertical greenery and a smart city design theme. Just in the years since Marlborough College Malaysia was set up, the speed of the development has been outstanding. The latest block of flats emerging quite literally from the sea bed within the last six months. As we drove up to the city, we noticed the effect on the local village that was split into two and the students were asked what social impacts this might make on locals and the destruction of the mangroves on the original shoreline to make way for the construction. Arriving in Forest City, we were given a tour of the high tech systems that account for ‘smart living design’ that would operate here through informative and interactive infographics,  video, simulation and activities. The pupils particularly enjoyed the CCTV camera that would make a guess at your age as you looked at it- not always with fantastic accuracy! Walking around the center certainly felt you were in a space ship taken straight from a star wars film set. After a general tour, we walked a video on an Imax- screen that used all the latest animative technologies to bring forest city to life- the pupils were particularly taken by the cars with face recognition lock technology and the self-drive capabilities of the local buses. Forest City seeks to be a congestion-free zone, with a smart-road system that is able to warn drivers and direct cars to avoid traffic. The city will also be pedestrianised as all parking of cars is underground leaving the surface free for green spaces encouraging clean air, that is monitored across the city. At the end of the video, we had a question and answer session in which some challenging questions were asked relating to the students’ research topics: sustainability, livelihoods and the impacts the development might have on the environment. Following our tour, we examined the scale model in the hall of the entire development. We asked ourselves what kinds of lives people were going to live here? What was the ‘future’ lifestyle projected to be like? What amenities did these people need, or want? Who were these people? This question was particularly eye-opening, as we were taken into different house-showrooms ranging from dining rooms full of Bentley leather chairs and expensive champagne flutes, to children’s rooms full of toys and bathtubs the size of paddling pools. The pupils studying livelihoods made notes of the kinds of living and income these people to use as a comparison to those in the Melayu fishing village. Pupils also noticed how one cannot, in fact, exist without the other- for instance, to meet the demand and supply of fresh fish for the amount of restaurants that would reside within Forest City. We ended our tour taking a look at the pool, and beach facilities, which were absolutely Instagram-perfect, to say the least, but certainly left us with a bizarre feeling of newness, an IKEA-showroom feeling, almost like you were as much on show as the buildings around you. By the end of the trip, the pupils were buzzing with questions, and ideas about how developers in this area wanted the people for the future to live, the importance of sustainability, and the risks that climate change will have on the development of Forest City. But, with the change in government and the threat of declining investment and fear of rising sea levels with climate change, a question remains- what is the future of Forest City? And would you consider living there? 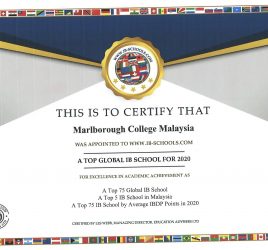