On Saturday, 2nd February 2019, five beaks and 38 MCM pupils from Year 7 to Remove travelled to the Aosta Valley, Italy, for a week full of snow-filled adventure. The excitement began as we flew over northern Italy and saw (for many for the first time in their lives) the snow-capped mountains of the Alps. A picturesque coach journey led us to our home for the week, Courmayeur. We went straight up to ski hire to collect our skis, poles and boots that would be integral to the week’s escapades. The alluring snow was too much to handle and after lunch, and checking into our hotel, pupils enjoyed a well-earned snowball fight in the fresh powder of the local park. Supper was devoured and pupils fell quickly to sleep in preparation for their first taste of the Courmayeur ski slopes.

We woke to the rising sun, with glowing pink mountains as children donned their ski attire and munched down a hearty breakfast. Taking the gondola up to ski hire, pupils figured out how to work their feet into ski boots and met their group’s ski instructor for the first time. Off they went: those who had never skied before took a chair lift up to a beautiful beginner bowl and the rest found their way to some lovely slopes on which to warm up. The pupils were fantastic, listening carefully and showing determination to understand how to ski or improve their skiing. For the next six days, pupils enjoyed their ski lessons to the full and made fantastic progress. Each group stopped on the mountain at various restaurants to enjoy a hot lunch and a tasty treat, and some were able to convince their instructors to have an extra hot chocolate afternoon break. From learning to snow plough to perfecting 180-degree jumps, the pupils gave every lesson their all, laughing their way through falls. We were blessed with near perfect skiing conditions: bright blue skies, gorgeous sunshine and heaps of fresh snow. Alongside this, the slopes were practically empty allowing everyone the space they needed to hone their ski skills.

After skiing each day pupils took part in a variety of après ski activities, as well as listening to the daily diary entry and finding out who were our King and Queen of the slopes. On Monday, the group let go of all inhibitions and sang their hearts out at karaoke. Tuesday allowed us to explore the town of Courmayeur and enjoy freshly made crepes, gelato and fill our shopping bags with local delicacies. On Wednesday we took a ride further down the valley to a bowling arcade. Bowling was great fun for all, even with the many gutter balls. However, it was the arcade games that stole the pupils’ hearts and soon they were working together as one giant team to collect as many tickets as they could from each game. It was a wonderful demonstration of companionship and the pupils managed to collect over 6000 tickets, winning two sledges for the group. On Thursday we visited the local town again and then went out to the local pizzeria for a special supper. Friday, our last night, was a time for celebration. Ski instructors came to award the pupils their ski badges and levels, whilst we also expressed our gratitude to them in return. Kind words were spoken of all, and staff were thanked for all their hard work in making the trip happen.  It was a moving evening. 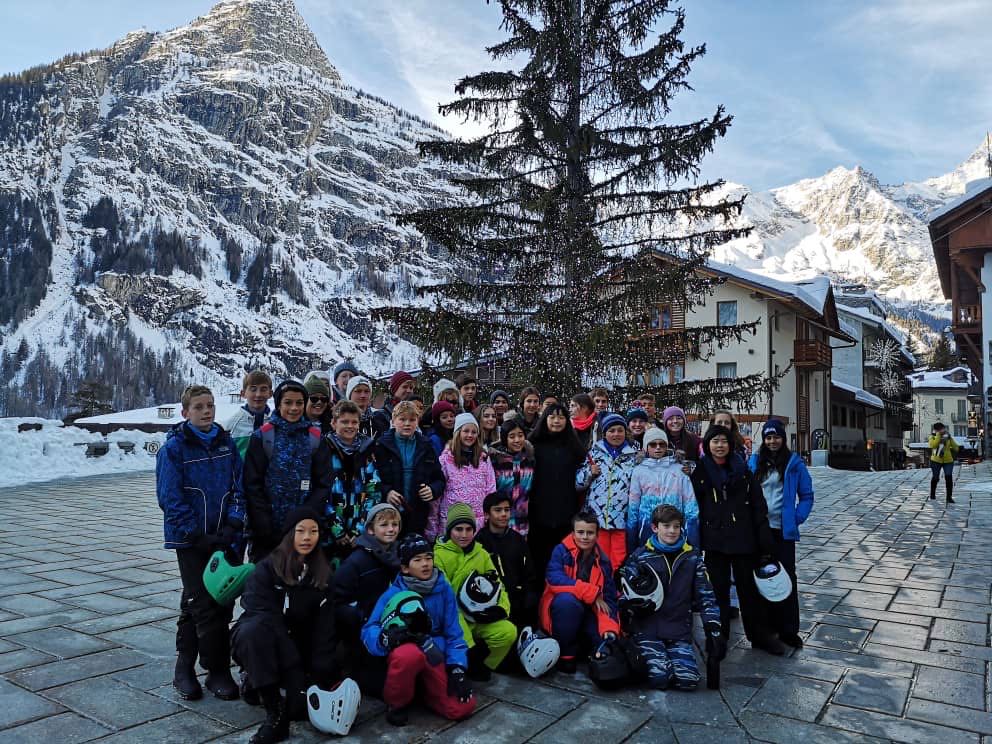