On 2nd December the Marlburian Committee hosted its third Sixth Form event of the year – the annual Christmas Social and we decided to organise activities and Christmas-themed games to get the MCM Sixth Form into the holiday spirit.

The evening began with a scavenger hunt.  However, the Committee soon encountered a minor crisis as we realised that the classrooms where we placed the clues were unfortunately locked, leading many teams astray. I’m sure the rest of the year will agree that the highlights of the social were playing ‘Pass the Parcel’ and munching on the generous amounts of pizza, drinks and chocolate provided. A big ‘thank you’ goes to everyone who attended and organised the event, and we hope that our future socials will be as much fun as this one. 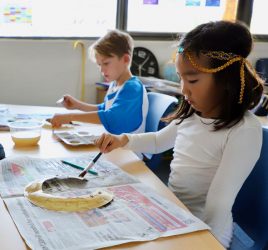