The MCM Senior School Drama Hall was transformed into a prohibition speakeasy for the Prep School performances of Bugsy Malone on 26th and 27th June 2014.

The two gangs battled it out on stage with pies and splurge guns, with Fat Sam’s gang coming off worse, only to finally resolve their issues; no longer being the bad guys but striving to be the good guys, for once.

Mr Dan Scott and his team worked tirelessly to create an outstanding set to reflect the time period and went for a bold Art Deco theme throughout. Special mention must be made of the cars! The ingenious idea of adapting a simple supermarket trolley to create two sedans and a police car really put the cherry on top of what can only be described as an outstanding set. To complement this we had splurge guns which the DT department kindly crafted for us and, with the attachment of ‘snow in a can’, we had some very effective splurge!

The actors blew the audience away with their professionalism and enthusiasm. O’ Dreary (Max Freedman) and Smolsky (John Ascough) were a great source of comedy by playing up to their roles which added a light-hearted thread weaving throughout the storyline. Not only were the principal actors outstanding, the show would be nothing without a full-bodied chorus to move the story along and to belt out those show-stopper tunes, with the finale being a true highlight.

Not only were there some brilliant big chorus numbers we also had beautiful solo performances and I don’t think there was one member of the audience whose heart did not melt when Fizzy (Jonathan Allen) took to the stage to sing the famous solo ‘Tomorrow’. At the other end of the spectrum we had the vibrant ‘My name is Tallulah’ to start the second half, with Julia Green confidently owning the stage and showcasing her wonderful voice. By contrast again, Blousy gave a fantastic and heartfelt performance of ‘Ordinary Fool’; with her innocent and demure portrayal of Blousy, Elena Tan also pulled at the heartstrings of the audience.

This was a truly amazing show with so many outstanding elements to it we feel we could write a novel! However, ‘on with the show’ for tonight’s second, and final, performance of Bugsy Malone. 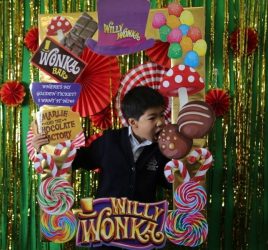