Following an early 6am wake up call and an impressive buffet breakfast at the hotel, we arrived at the pitches full of anticipation for the day ahead. During the pool stages, the girls put in one fantastic performance after another and ended the morning’s play with 4 wins and 1 draw. Some powerful and accurate striking from Lilia Odhner, defensive domination in the midfield from Daisy Laming and Macy Hall and outstanding goalkeeping from Annalisa Bernerius, ensured that we were a real threat throughout.

Unfortunately, we missed out on the top place in Pool A to Alice Smith School, due to goal difference. Nonetheless, we secured a place in the semi-final against Garden International School A team, who came out top in Pool B. The match was tense and possession was fiercely fought but MCM could not be denied their well-deserved spot in the grand final, as Lilia put the ball in the back of the net to end the game 1-0.

The heavens opened just as the final got underway and playing conditions became extremely challenging for both parties. The power of the matching neon yellow hairbands assisted MCM in working together to dominate possession. We had several shots on goal, which were mostly deflected by ISKL off the back line. A series of 8 corners slowed down play and wasted much of the game time. Full time brought a 0-0 score sheet and meant that the dreaded penalties would take place…

After 3 penalties each, both teams were still level and the pressure for the goalkeepers and strikers was almost unbearable. The team sank with disappointment as our 4th penalty hit the crossbar, making ISKL victorious.

Well done to all the girls involved in the silver medal winning performance. Only an MCM team could produce such a stirring display of teamwork, character and grit. It was extremely awe-inspiring and the girls were a pleasure to coach. 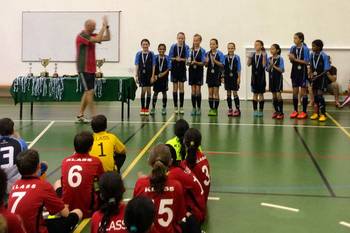