On Sunday 2nd March, we were delighted to welcome Mr Dan Hannan, Member of the European Parliament and Old Marlburian, who gave a most interesting and articulate talk.

After Marlborough College, Dan took a First Class degree in Modern History at Oxford. He was elected as the youngest member of the European Parliament in 1999. He has been a lead writer for the Daily Telegraph and he has also written for various other newspapers, including The Wall Street Journal. He became an internet sensation in 2009 when a YouTube recording of his speech at the European Parliament became the most viewed video for two days running.

The subject of Dan’s talk was based on the central theme of his latest book: ideas about freedom (individual rights, private property, the rule of law, and representative government), and the communication of these ideas throughout history. He also talked about the greatest threats to this concept of freedom in 1941. He also responded to questions from pupils, parents and Common Room on topics such as the European Union and Scottish devolution.

Finally, Dan was presented with a copy of the Master’s book – a challenging addition, in terms of the baggage allowance, for the flight home. 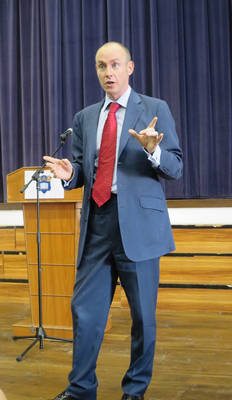